An Alternative Algorithm for Subtraction

In the previous posts, I have shared to you an alternative algorithm for multiplication and division. In this post, I am going to share with you a different algorithm for performing subtraction. This algorithm does not involve “borrowing” from a higher place value but subtracts individual digits. To illustrate this algorithm, let’s consider some examples.

First, we separate the digits of the numbers as shown below.

Second, we subtract the corresponding digits. 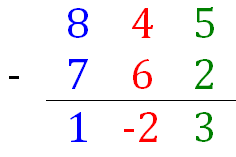 Lastly, add the numbers in the answer using their place values and signs. For instance, in the example above, 1 is in the hundreds place, therefore, it becomes 100. Also, -2 is in the tens place, so its value is -20. This means that we have to add as follows:

Performing the algorithm above, we have the following.

Now, try several more examples and see if this algorithm works. Make a conjecture about the algorithm.

There are several questions that you might want to explore about this algorithm. I encourage students especially in elementary school and middle school to think about these questions and answer them. I think it is a good project for mathematical investigation in levels just starting negative numbers and algebraic expressions.

It would be very good if middle students can develop an algebraic proof of why the algorithm works.

Reference: I saw this algorithm in a Facebook page. I don’t exactly know its origin.