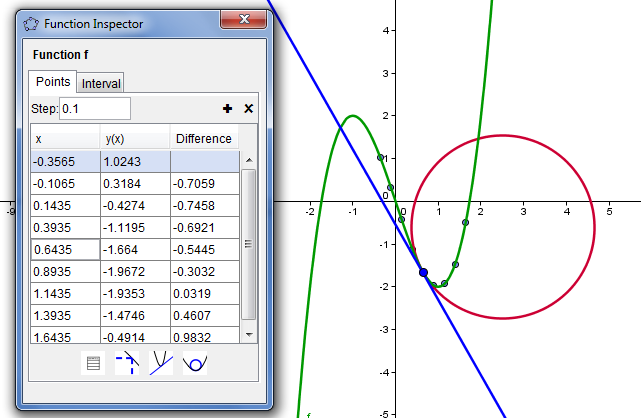 This is the sixth post in the GeoGebra 4.0 Sneak Peek Series. In this post, we are going to learn about the Function Inspector tool.

The Function Inspector is a new tool introduced in GeoGebra 4.0.  This tool ‘inspects’ functions revealing properties such as its minima,  maxima, root, area, and mean, etc., of a given interval. 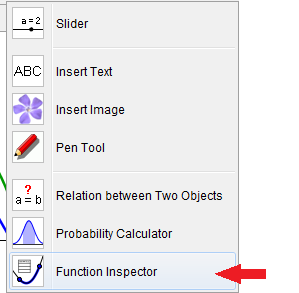 The Function Inspector can also generate tables  of values of  x and f(x) given an interval and step value. This is very useful since we do not have to type them manually and use formulas in the Spreadsheet View.  In addition to the x, f(x) table of values, we can also add columns that display the differences between consecutive f(x) values, first derivative, and the second derivative. END_OF_DOCUMENT_TOKEN_TO_BE_REPLACED

This is the fifth post of the GeoGebra 4.0 Sneak Peek Series.

One of the major enhancements of GeoGebra 4.0 is the integration of Computer Algebra System (CAS).  The GeoGebra CAS window can be viewed by clicking the View>CAS from the menu bar. The CAS toolbar includes the following tools as shown in the first figure:  Evaluate (exact evaluation), Numeric (numeric evaluation; e.g. sin(1)), Keep Input, Factor, Expand, Substitute, Solve, and Differential/ Integral.

You can enter  expressions/equations at the CAS window (see black texts below) and click the buttons at the toolbar to perform a command. The output of a command is shown in blue texts. Line 1, for example, used the Evaluate button to simplify 2x + 4x – 3y + 2y. END_OF_DOCUMENT_TOKEN_TO_BE_REPLACED 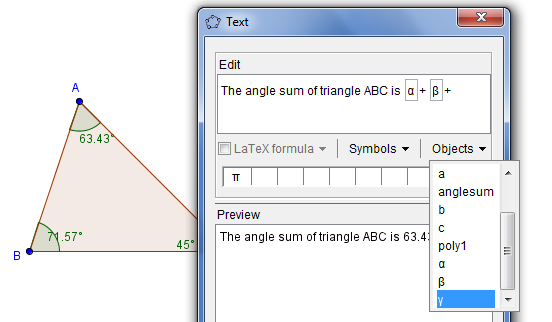 The big problem of the Object list, however, is when you have constructed a lot objects.  This will give you a very long list, and you will have to do a lot of scrolling down to look for a particular object.  I hope that this could also be improved later, in GeoGebra 5.0 perhaps, if it is not possible in the next version. END_OF_DOCUMENT_TOKEN_TO_BE_REPLACED