In last week’s post, we have talked about large numbers and their importance to scientific studies and everyday life. In this post, we talk about one of the most famous large numbers: googol.

A googol is the name of the number which is

followed by one hundred zeros. If you are wondering how large it is, well it is fairly large since the number of atoms in the observable universe is only

. That means that we need

universes, the size of the observable universe, to create a universe with googol number of atoms.

The term googol was coined in 1938 by Milton Sirrota (he was 9 years old the time he invented the term), nephew of Edward Kasner, an American mathematician. Kasner was famous for his book Mathematics and the Imagination

where he introduced the term googol. END_OF_DOCUMENT_TOKEN_TO_BE_REPLACED

The Uses of Large Numbers

Large numbers are used mostly used in astronomy and cosmology.  According to the Big Bang Model, the universe is estimated to be

seconds old, the observable universe is

meters, and it contains

In computing, if a hacker attempts to open a computer with up to a 40-character password, we should really wish him luck. Even though he may create a program that would display 1 billion strings per second indefinitely, it would take him

years to complete all the combinations.  That is way, way older than the universe which is  only about 13.7 billion years old. END_OF_DOCUMENT_TOKEN_TO_BE_REPLACED

Light Year and the Mathematics of the Stars

Last week, we have talked about large numbers and one million. In this post, we will talk about some of the practical uses of large numbers.

One of the uses of large numbers is to measure long distances; for instance, distance between celestial objects. Shown below is a table of the distances of the planets from the sun and from earth rounded off to the nearest thousand kilometers. Giving a speed of a commercial airline (approximately 500 kilometers per hour), a trip from Earth to Venus will require us 10 years of travel while traveling to Pluto will require us 1,306 years. Shocked? 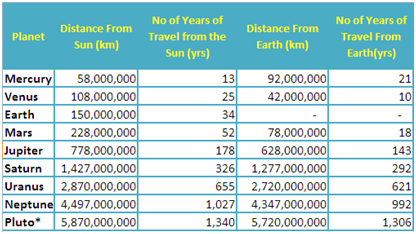 *By the way, Pluto has recently been demoted. Recent updates made it clear that it does not qualify being one of the planets. END_OF_DOCUMENT_TOKEN_TO_BE_REPLACED