In last week’s post, we have talked about large numbers and their importance to scientific studies and everyday life. In this post, we talk about one of the most famous large numbers: googol.

A googol is the name of the number which is

followed by one hundred zeros. If you are wondering how large it is, well it is fairly large since the number of atoms in the observable universe is only

. That means that we need

universes, the size of the observable universe, to create a universe with googol number of atoms.

The term googol was coined in 1938 by Milton Sirrota (he was 9 years old the time he invented the term), nephew of Edward Kasner, an American mathematician. Kasner was famous for his book Mathematics and the Imagination

where he introduced the term googol. END_OF_DOCUMENT_TOKEN_TO_BE_REPLACED

Exploring Computational Thinking is one of Google’s latest endeavors in K-12 curriculum. Computational thinking (CT), according to Google, involves a set of problem-solving skills and techniques that are commonly used by software engineers to write computer programs.

Several of this computational techniques are the following: END_OF_DOCUMENT_TOKEN_TO_BE_REPLACED

If you have enjoyed Facebook, Google+ is another way to get connected to your family, friends, and colleagues online.  Google+ is a new social networking service lauched by Google. As of this writing, Google+ is on field testing and membership is on an “invite only.”

The things I like most about Google+ is that you can choose “circles” who can view your wall posts. You can share intimate thoughts with friends, and have professional conversations with colleagues without one group reading the message for the other. This is not the case in Facebook yet. 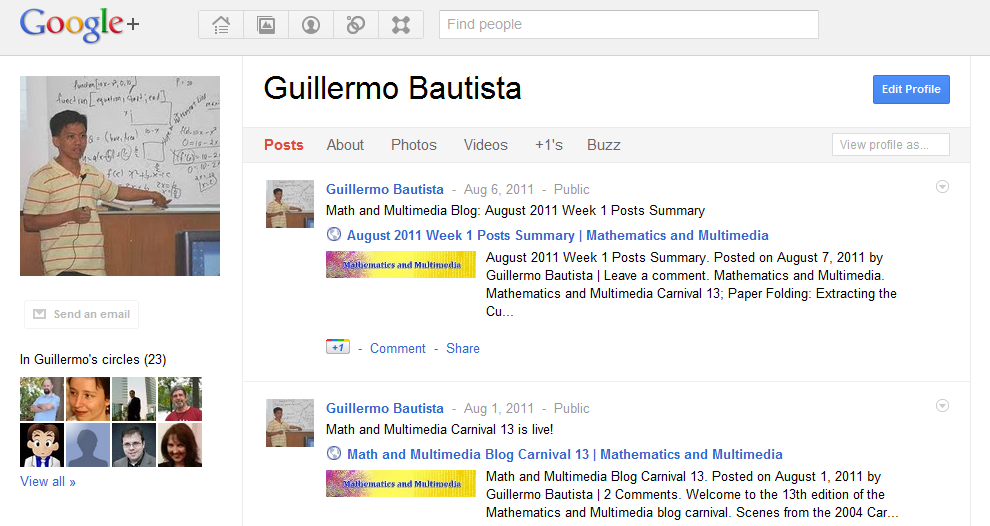 Here are some of the major features of Google+. END_OF_DOCUMENT_TOKEN_TO_BE_REPLACED