How to use the summation symbol

If we want to add the expression

all the way up to

, it is quite cumbersome to write

. Mathematical notations permit us to shorten such addition using the

symbol to denote “all the way up to” or “all the way down to”. Using the this symbol, the expression above can be written as

There is, however, a more compact way of writing sums. We can use the Greek letter

In the figure above, a is the first index, and letter b is the last index.   The variable(s) are the letters or the numbers that appear constantly in all terms. In the expression

is the first index,

is the last index and

is the variable. We use the letter

as our index variable, or the variable that will hold the changing quantities.  Hence, if we are going to use the sigma or the summation notation for the expression

Some of the examples are shown below.  Observe the colors of the indices and the variables, to familiarize yourself how the summation symbol works. 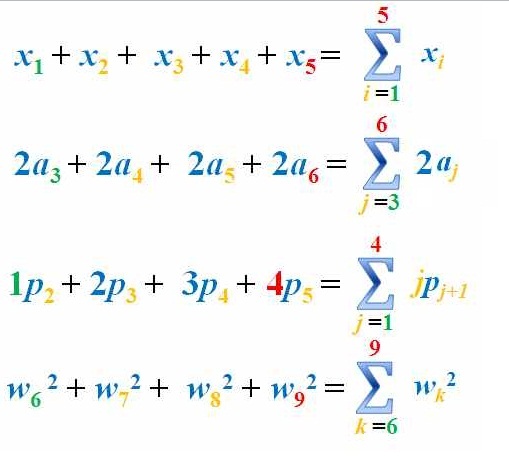 In using the summation symbol, take note of the following:

Properties of the Summation Symbol

. Regrouping the expression, we have