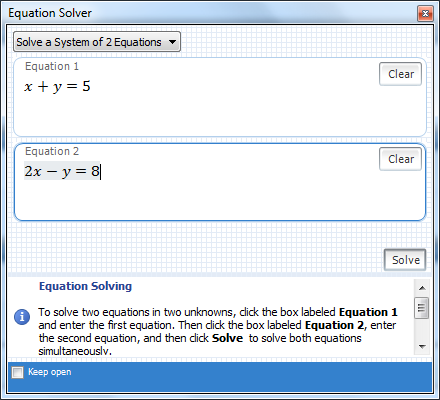 To try the examples below, open Microsoft Mathematics and be sure that you are on the Worksheet tab.

To solve the equation

, type 2x – 3 = 5 in the Input text box and then press the ENTER/RETURN key on your keyboard. The output of the command is shown below.

Notice that tirst, the input was reformatted to solve (2x – 3 = 5, x) and second, the solution is shown at the bottom. The Solution steps, a link which can be expanded, is also shown. Microsoft Mathematics is capable of generating solution steps with complete explanation to some algebraic problems. Clicking the Solution steps link will show the figure below.

Solutions to equations in more than one variable can also be performed in Microsoft Mathematics. Type the following in the input box (press ENTER after each command), and see what happens.

To solve systems of equations, do the following:

2.) In the upper left corner, select how many equations to solve.  The option provides up to six equations.

3.) Type the equations in the Equation boxes.

4.) When done, click the Solve button to solve the system of equations.

Note: The section on Solving Equations above could be done in Equation Solver.