Proof of the Sum of Square Numbers

In the first part of this series, we have counted  the number of squares on a chessboard, and we have discovered that it is equal to the sum of the squares of the first 8 positive integers. The numbers

and so on are called  square numbers. This method can be generalized to compute for the number of squares on larger square boards. If the measure of a board is

, then the number of squares on it is

In this post, we find an equivalent to the preceding expression using “proof without words” since adding lots of numbers is very cumbersome. For example, it is very difficult to count the number of squares in a

board without using a computer. 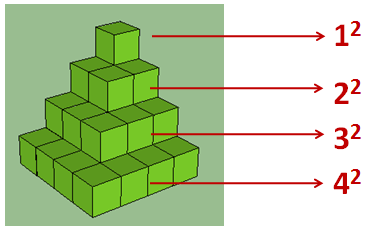 Second, we create two more stacked cubes of the same shape as shown in Figure 2, and form a rectangular prism using the three stacks.

However, we can observe that we cannot form a rectangular prism as shown in Figure 3. A non-square portion of the red cubes are extended to the top face leaving “empty regions.”

To eliminate the extended area, we cut it into half horizontally, remove half of it,  rotate, and fill in the empty regions as shown in the next figure. This makes the final figure a rectangular prism.

We can express its edge lengths of the formed prism in terms of the side length of the largest square prism in each stack which is 4 units. In effect, the dimensions of the prism made of three stacks of cubes are

. Therefore, the volume is 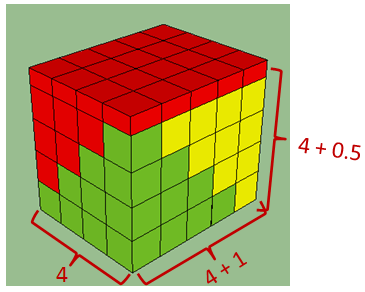 This process can be generalized to form larger cubes (left as an exercise). In general, the volume of one stack of cubes with whose side length of the largest square is

is described by the expression