Triangular Numbers and the Sum of the First n Positive Integers

The numbers 1, 3, 6, 10, 15, … are called triangular numbers because they could be arranged in the form of triangles. Triangular numbers is one of the polygonal numbers — numbers that can represented by dots to form regular polygons. 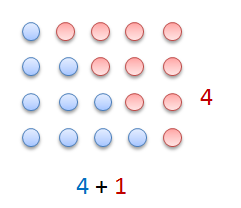 Since the triangle is half the rectangle, the fourth triangular number is

which is equal to 10.  Clearly, this method can be generalized. To find the nth triangular number, we create dots representing two triangular numbers with side length n. We use them to form a rectangle with area

. We divide the area by 2 giving us

From the first figure, we observe the following:

Generalizing the pattern above, we have

Notice that calculating for

is the same as finding the sum of the first

positive integers, which we have already discussed to be

Triangular numbers and other polygonal numbers were explored since the ancient times, particularly by the Pythagoreans.  The Pythagoreans believed that everything in the universe can be represented by numbers.   They also believed that variety of shapes can be described by the arrangements of their particles.