Finding the General Formula for the kth Polygonal Number

The Representation of Square Numbers

The Representation of Triangular Numbers

To answer this question, consider the next figure. In the figure, we see the geometric representations of square, pentagonal, and hexagonal numbers. Study the groupings of the dots before scrolling down and see if you can find some patterns.

Second, we can observe the group of blue dots. Their rectangular border makes them look like a stick so we call each group a stick. Observe that the square numbers, pentagonal numbers, and hexagonal numbers have 3, 4, and 5 sticks respectively.

Third, notice that we have isolated the red dot.

Total Number of Dots on Sticks 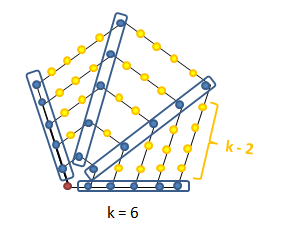 Therefore, the total number of dots on all the triangles is equal to

We now answer the question above: “What is the 8th heptagonal number?”

A heptagon has 7 sides, so n = 7. The 8th heptagonal number has 8 dots on each side so k = 8. Substituting the values to the formula, we have

Therefore, the 8th heptagonal number is 253.