Aside from points, as we have discussed in the previous post, the other two undefined terms in Geometry are lines and planes. A line may be drawn through two points, while three points are needed to determine a plane. The representations of these undefined terms are the building blocks of Euclidean Geometry.  They can be combined to create shapes, drawings, and sketches such as the painting shown in the first figure. Looking at the painting makes us realize that almost all the things around us are  mostly basic geometric shapes. 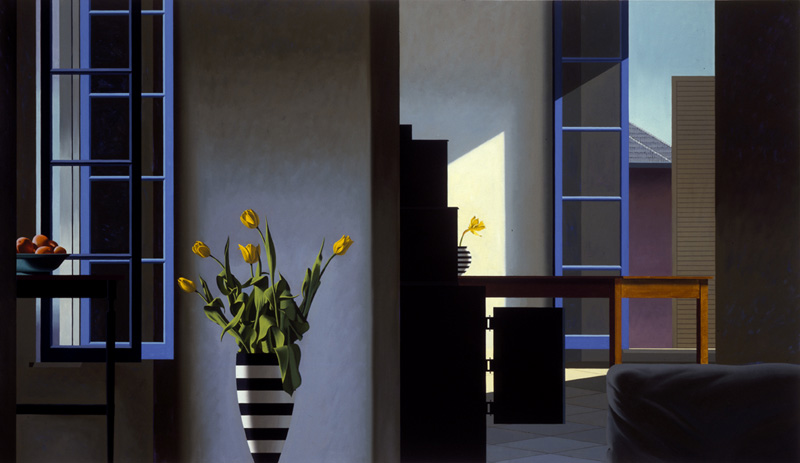 In the painting above, we can easily see geometric shapes such as rectangles, triangles, trapezoids , and parallelograms. We can also see curves and arcs in vases, flowers, and fruits.  Notice that although the painting seems to be only made by these shapes, the artist has made it look very realistic. For example, the window frames located at the left side of the painting are of the same size, but the artist made the ‘nearer’ frame larger to give a somewhat three dimensional effect.  In doing so, the painter considered the distance of the window frames from the observer.  The farther the frame, the smaller its size. Observe that this technique is more apparent in the painting by Vincent Van Gogh in the second figure. Rooftops, View from the Atelier The Hague (1882), Vincent Van Gogh

The concept used in the two paintings above is called perspective.  Perspective, in the graphic arts, such as drawing is the art of giving a drawing the illusion of three dimensions.  It is an approximate representation in flat surface (such as paper) of an image as it is seen by the eye (Wikipedia).