Increasing and Decreasing a in the linear function y = ax

In the previous post, we have learned the effect of the sign of a in the linear function

. In this post, we learn the effect of increasing and decreasing the value of a. Since we have already learned that if

, the graph is a horizontal line, we will discuss 2 cases in this post:

Let us consider several cases of the graph of

. Let the equation of the functions be

, respectively. As we can see from the table, for the same

is increasing faster than

is increasing faster than the increase in

decreases, the decrease in

is faster than the decrease in

, and the decrease in

is faster than the decrease in

Generalization 1: In the function

, the larger the value of the

From the table above and from the graph below, we can deduce that the smaller the value of the slope, the function decreases faster. Again, the faster the decrease, the steeper the graph. 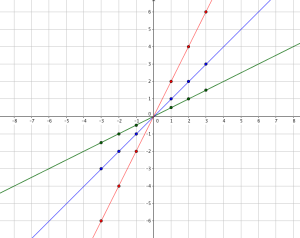 Generalization 2: In the function

, the smaller the value of the

From the two generalizations above, we can say that in the graph of

, as the absolute value of a increases, the larger is the y value and the steeper its the graph.

Leave a comment linear function, slope of a function