Area Tutorial 5 – Area of a Trapezoid

In this tutorial, we are going to derive the area of a trapezoid. A trapezoid (sometimes called a trapezium) is a quadrilateral with exactly one pair of parallel sides. Trapezoid PQRS is shown below, with PQ parallel to RS.  We have learned that the area

of the trapezoid with bases

is given by the formula 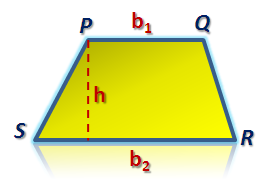 We are going to derive the area of a trapezoid in two ways: First by dividing into different sections and second by rotation.

Derivation 1: Area by Dividing into Regions

If we drop another line from Q, then we will have two altitudes namely PT and QU, which both have length 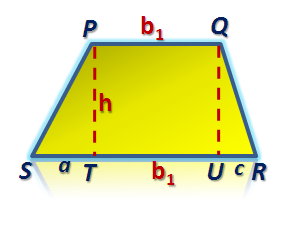 Figure 2 - Trapezoid PQRS divided into two triangles and a rectangle.

, the longer base of our trapezoid. Hence,

In the second derivation, we are going to duplicate the trapezoid and rotate it as shown below. It is evident that quadrilateral PS’P’S is a parallelogram (Why?). But we have learned that the area of the parallelogram is the product of its height and its base. Hence,

Figure 3 - PQRS translated and rotated to form a parallelogram.