This is the first tutorial in the Geometer’s Sketchpad Essentials (GSP) Series.  In this tutorial, we are going to investigate the medians of a triangle. We will learn how to use the basic tools: Point Tool, Selection Arrow Tool, and the Segment Tool. If you are not familiar with GSP, you may want to read Introduction to Geometer’s Sketchpad. 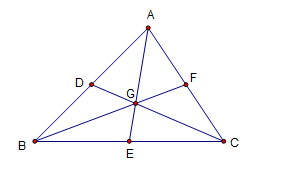 The output of our tutorial is shown in the Figure above; points D, E, and F are midpoints of the sides of triangle ABC.  END_OF_DOCUMENT_TOKEN_TO_BE_REPLACED

Before I became a GeoGebra user, I had been a user of Geometer’s Sketchpad (GSP version 4.07) for quite some time. Although I am a great fan of GeoGebra, GSP requires more mathematical maturity to use, and in several aspects, has also its advantages. Sometimes, I am tempted to write a comparison between the two software, but I fear that I might be biased because I haven’t been using GSP very much nowadays.

This tutorial series will discuss the basics of GSP,  and is parallel to the GeoGebra Essentials Series.   The future topics  are as follows: END_OF_DOCUMENT_TOKEN_TO_BE_REPLACED