The Pythagorean Theorem is one of the most interesting theorems for two reasons: First, it’s very elementary; even high school students know it by heart. Second, it has hundreds of proofs. The proof below uses triangle similarity. 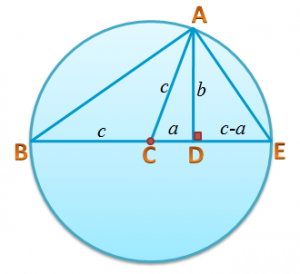 In a right triangle with side lengths

In the figure above, triangle

is similar to triangle

.  In similar triangles, the corresponding sides are proportional. It follows that

which is equivalent to

Cross multiplying, we have

to both sides of the equation, we  have

, which is what we want to prove.