In the first part of this series, we have learned  4 easy ways to graph linear functions. . In this post, we will learn how to sketch the graph of a quadratic function. Quadratic Functions are functions with equation

. This is the standard form. This equation can also be expressed in the form

is the vertex form.

Here are some of the properties of

in relation to its graph. For students, it is really important that you think about them — don’t just memorize.

1. Direction of the Graph

then the graph of a quadratic function opens upward. If

The axis of symmetry of the quadratic function is a vertical line that passes through its vertex. In standard form is

, while in vertex form is

Using the properties above, let us sketch the graph of

The graph opens upward since

To get the vertex, we convert the equation into the vertex form which gives us

. This means that the vertex

For the y-intercept, we set

. So, the graph passes through 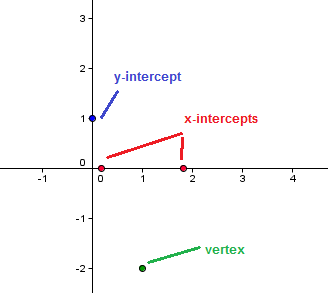 The x-intercepts or the roots can be obtained by setting

. Using the quadratic formula, we get

.  So, the points also passes through

. We have enough points to graph as shown above.

Since the parabola is symmetric, the axis of symmetry can be used to reflect the point on the y-axis resulting to the fifth point on the graph. 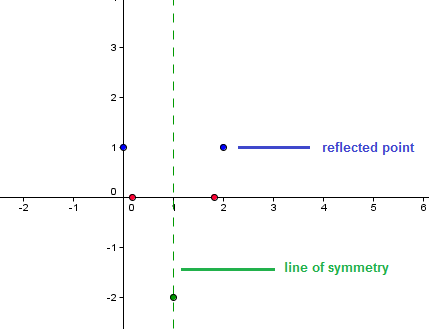 With all the points, it is now possible to sketch the graph as shown below. 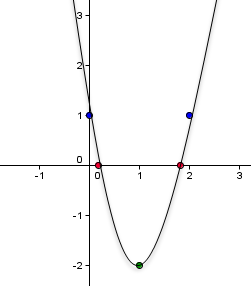 At times, the quadratic function can have no x-intercepts making only the vertex and y-intercept as critical points. Of course, additional points on the graph may be obtained by substituting values for x.