Despite his short life and his numerous misfortunes, his works gave a firm foundation to group theory. END_OF_DOCUMENT_TOKEN_TO_BE_REPLACED

Where is the Nobel Prize in Mathematics?

The Nobel Prize are prestigious awards given each year to individuals (as well as organizations) who have contributed significantly in cultural and scientific advances.

Alfred B. Nobel, the inventor of dynamite, bequeathed 31 million Swedish kronor in 1895 (about 250 million dollars in 2008) to fund the awards for achievements in Chemistry, Physics, Physiology and Medicine, Literature, and Peace. In 1901, the first set of awards were given, and in 1969, the Nobel Foundation established the Nobel Prize for Economics.

But did you ever wonder why there was no Nobel Prize of Mathematics? END_OF_DOCUMENT_TOKEN_TO_BE_REPLACED

The Fermat’s Last Theorem is one of the hardest problems in the history of mathematics.  The problem was written by Pierre de Fermat in 1637, and it was only solved more than 300 years later —  in 1995 by Professor Andrew Wiles.

But what is exactly the Fermat’s Last Theorem?

is satisfied. For example, a right triangle with side lengths 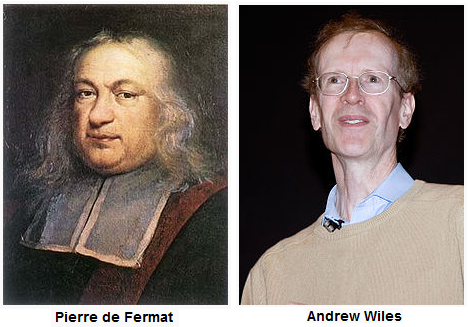 There are some interesting things that we can see if we examine the side lengths of right triangles.  For instance, if we let the triples

be the side lengths of a right triangle, where

is the hypotenuse, we can find triples such that all lengths are integers. The triples