How Mathematics is Used In Pixar

If you find your students asking when will they use mathematics in their life, then maybe you can answer them that they might want to be an animator or graphics artist at Pixar. 🙂 Pixar is one of the of the most popular animation studios in the world. It is the producer of Toy Story, Bug’s Life, Monsters, Finding Nemo, Brave and more.

Pixar uses a bunch of mathematics in making these animations. In the 7-minute video below, Tony Derose from Pixar explains how middle school and high school mathematics such as coordinate geometry and the concept of midpoints are used in Pixar animations. Watch the video and be amazed.

The Cartesian plane is one of the greatest inventions in mathematics.  Had Rene Descartes not invented the rectangular coordinate system, calculus would not have progressed immensely as we are using it in our time.

In mathematics, vectors are usually represented by a directed line segment. The arrow  of the directed segment is called its head, and the other end is called its foot. 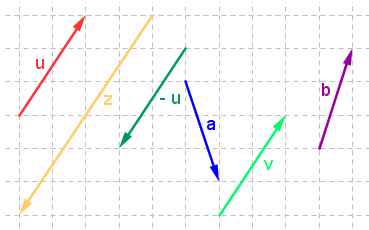 The negative of a vector is the vector  equal in length to a certain vector, but with opposite direction. For instance, in Figure 1, – u and u are negative of each other and vector u is also the negative of vector v. END_OF_DOCUMENT_TOKEN_TO_BE_REPLACED