Regular Tessellations: Why only three of them?

In Tessellations: The Mathematics of Tiling post, we have learned that there are only three regular polygons that can tessellate the plane: squares, equilateral triangles, and regular hexagons. In Figure 1, we can see why this is so. The angle sum of the interior angles  of the regular polygons meeting at a point add up to 360 degrees.

Looking at the other regular polygons as shown in Figure 2, we can see clearly why the polygons cannot tessellate. The sums of the interior angles are either greater than or less than 360 degrees. END_OF_DOCUMENT_TOKEN_TO_BE_REPLACED

Many of my readers emailed and requested me to write a tutorial on drawing  beautiful geometric diagrams such as shown in Figure 1, so I will include it in my tutorials.  Most diagrams in this blog are made using GeoGebra and Windows Microsoft PowerPoint. The tessellations shown in Figure 1 that we are going to create today was made using Windows MS PowerPoint 2007.  It was taken from my post Tessellation: The Mathematics of Tiling.

In this tutorial, we are going to create blue hexagonal tessellation, shown in Figure 7, and  I will leave to you the square and triangular tessellations as an exercise.

Figure 1 – Regular polygons that can tile the plane.

1. Open Microsoft PowerPoint. Your window should look like the one shown in Figure 1.

2. Delete the two text boxes (the one with the Click to Add title and, Click to Add subtitle) by clicking them and pressing the Delete key on your keyboard.

4. To change the color of the hexagon select it and click the Format menu should appear at the rightmost part of the menu bar.

5. In the Format menu, click the Shape Fill drop-down button and choose Light blue from the color palette (or you can choose any color you want.) 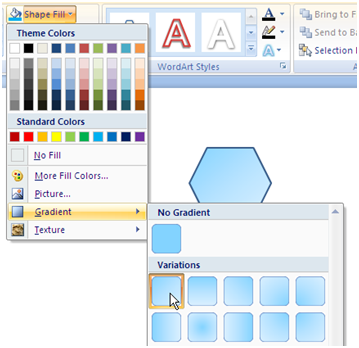 7. Next, we will thicken the border line. To do this, click the Shape Outline drop down button (below the Shape Fill), select Weight then select 3. Your drawing should look like the Figure below.

8. To duplicate the hexagon you just created, select it, press CTRL-C to copy (that is, hold the CTRL key on your keyboard, the press C), then press CTRL-V six times.

9. Use the mouse or ARROW keys on your keyboard to tessellate. Your final output should look like the figure below. 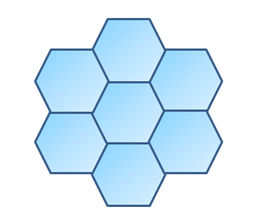 10. As an exercise, tessellate different shapes (square or equilateral triangle), and use different colors and gradient styles. Copy the other two tessellations shown in Figure 1.