In the previous post, I introduced to you the 0.0001 Time Rate approach This post is an extended application of the said technique on curvatures and radius of curvatures.

Curvature is defined (by The Facts on File Dictionary of Mathematics) as the rate of change of the slope of the tangent to a curve. For each point on a smooth curve there is a circle that has the same tangent and the same curvature at that point. The radius of this circle called the “radius of curvature”, is the reciprocal of the curvature, and its center is known as the center of curvature. If the graph of a function y=f(x) is a continuous curve, the slope of the tangent at any point is given by the derivative dy/dx and the curvature is given by

and the radius of curvature is given by

is the derivative of

This is the 17th tutorial of the GeoGebra Intermediate Tutorial Series. If this is your first time to use GeoGebra, I strongly suggest that you read the GeoGebra Essentials Series.    In this tutorial, we are going to use slider control a, b, c, d and e and graph the function f(x) = ax4 + bx3 + cx2 + dx + e. 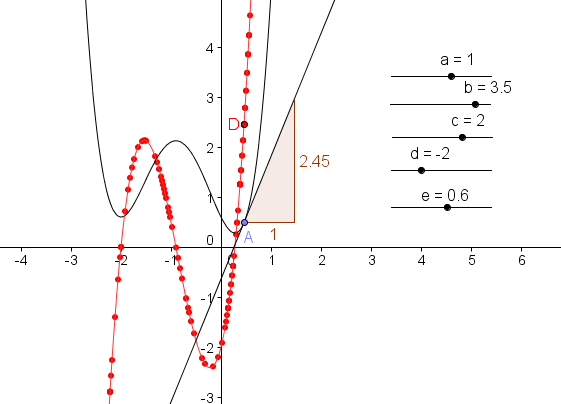 We then  construct a line tangent to the function and passing through  point A and trace the graph of the point whose x-coordinate is the x-coordinate of A, and whose y-coordinate as the  slope of the tangent line. We compute for the derivative of f(x), and see if  there is a relationship between the trace and the derivative. If you want to follow the this tutorial step by step, you can open the GeoGebra window. Before following the tutorial, you may want to see the final output. 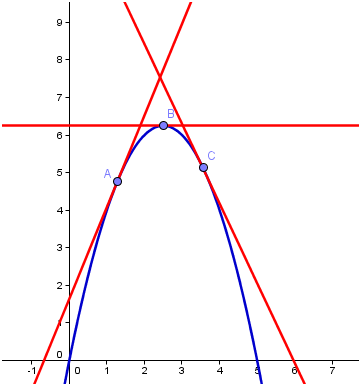