In this post, we learn how to find the center of the circle in different ways.  END_OF_DOCUMENT_TOKEN_TO_BE_REPLACED

The vertex angles, on the other hand, are inscribed angles as shown in the second image above. Notice that if we add them up, they also intercept the entire circle (Can you see why?).  In effect,  their angle sum is half of 360°,  which equals 180°. END_OF_DOCUMENT_TOKEN_TO_BE_REPLACED

The Proof of the Tangent Half-Angle Formula 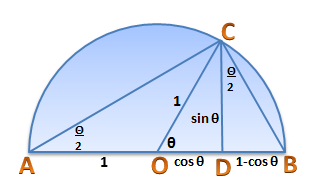 In this post, we prove the following trigonometric identity:

Consider a semi-circle with “center”

and radius equal to 1 unit as shown below.  If we let

, then by the Inscribed Angle Theorem, 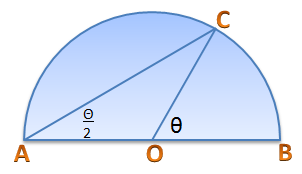 as shown in the second figure. We can compute for the sine and cosine of

which equal to the lengths of